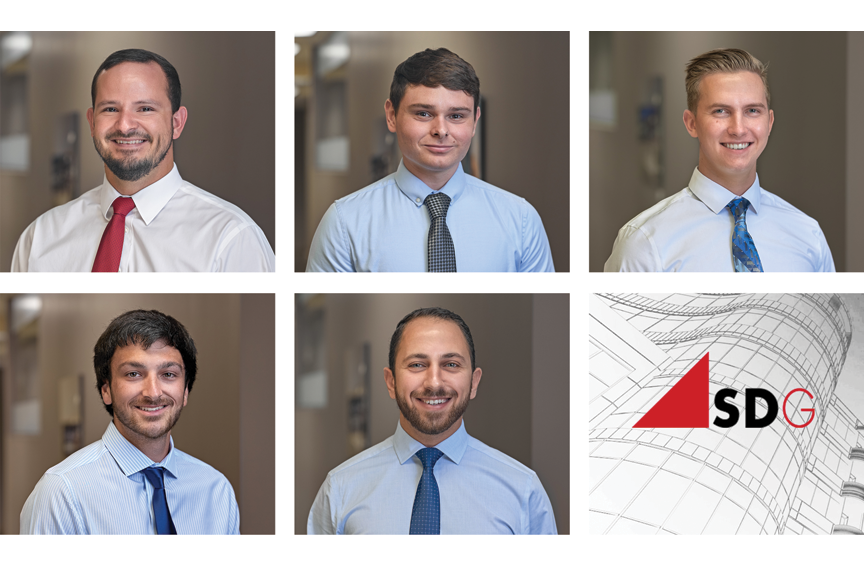 SDG is excited to announce the addition of 5 recent engineering graduates to our design team of structural engineers.

Auston Wingard, E.I. joined SDG in May of 2020 following completion of his M.S. in Civil Engineering from Auburn University. He obtained his B.S. in Civil Engineering from Auburn in 2017 and previously worked with the U.S. Army Corps of Engineers Engineer Research and Development Center in Vicksburg, MS and Hargrove Engineers and Constructors in Mobile, AL as a Structural Engineering Intern. At Auburn, he was involved with ACI and ASCE and was an ASCE Southeastern Conference Seismic Design Competition Winner and a member of the Auburn Fishing Club.

Andrew Slaven, E.I. joined SDG in January of this year following his December graduation from Virginia Tech with an M.S. in Civil Engineering with Emphasis in Structural Engineering and Materials and a 4.0 GPA. He received a B.S. in Civil Engineering with a Minor in Mathematics and a 3.96 GPA in 2019 from Arkansas State University. He previously completed internships with both the Tennessee and Missouri Departments of Transportation and was a Graduate Teaching Assistant while at Virginia Tech. Andrew also holds an ACI Concrete Field Testing Technician, Grade I Certification.

Noah Baioni, E.I.T. received his B.S. in Civil & Environmental Engineering in 2020 and his M.E. in Civil Engineering (with a 3.8 GPA) in May 2021 from the University of Louisville. He has his E.I.T. and joined SDG in May. He previously completed engineering internships with The Troyer Group and Brasfield and Gorrie General Contractors in Louisville, KY.